Anyone who’s flown in the last several years should know that all liquids must be in 3.4-ounce or less sized bottles. A mini bottle of alcohol is around 1.7 ounces. Which led some of my frequent flier and budget conscious friends to ask me if it’s legal to bring and drink your own alcohol on a flight? Or if you are waiting for a flight, where in the airport can you drink? Do you have to only consume alcohol at an airport bar?

While you can certainly get your minis through security, drinking them is another issue entirely.  Federal Aviation Administration’s (FAA) regulations regarding onboard alcohol consumption, which appear in the Federal Register at 14 CFR 121.575. As the very first line of that section notes…

(a) No person may drink any alcoholic beverage aboard an aircraft unless the certificate holder operating the aircraft has served that beverage to him.

While initially there appears to be a loophole that so long as you handed your drink to the flight attendant to open it for you and they served it, you could drink. But the FAA updated their regulations in 2012 to prohibit consumption of any alcohol brought onto the plane by anyone other than the airline.

Unfortunately, preliminary research indicates that there is no universal rule or policy that every airport must follow and the policies seems to be different from airport to airport. Nor was there a master database of all airports where you can legally take a drink to go.

But from research conducted by Thrillist it appears that "Nashville International, Chicago’s Midway and O’Hare, both Houston airports, Fort Lauderdale International, Las Vegas McCarran International, Miami International and Tampa International all allow you to buy a drink and enjoy it wherever, even at your gate." They did not indicate if you could also bring your own small bottles through security and enjoy them at the gate, rather than buy the drinks at the airport.

Often times there are marked off areas within airports where people can enjoy a drink, whether from a plastic to-go cup from an airport bar or from a kiosk. Alternatively, it seems that in airports with tablet ordering stations, it is implied that you can drink from wherever you place your order.

I reached out to Buffalo Niagara International Airport about their policy but have not received a reply as of the publishing of this article. I will update with additional information if I hear back.

The FAA Modernization and Reform Act of 2012 has a section called “Enhanced Training For Flight Attendants.” In short, this means that passengers are not allowed to consume alcohol that they personally brought aboard the plane on any flight required to follow FAA regulations. Think of the plane like a bar with a roving bar cart. You can’t drink your own alcohol in a bar, and you can’t do it on a plane, either (even if you have those little plane-friendly cocktail kits). “Bottom line is alcohol must be provided and served by the air carrier,” Ian Gregor, communications manager for the FAA Pacific Division, tells Matador in an email. “We don’t allow BYOB in air carrier operations.” 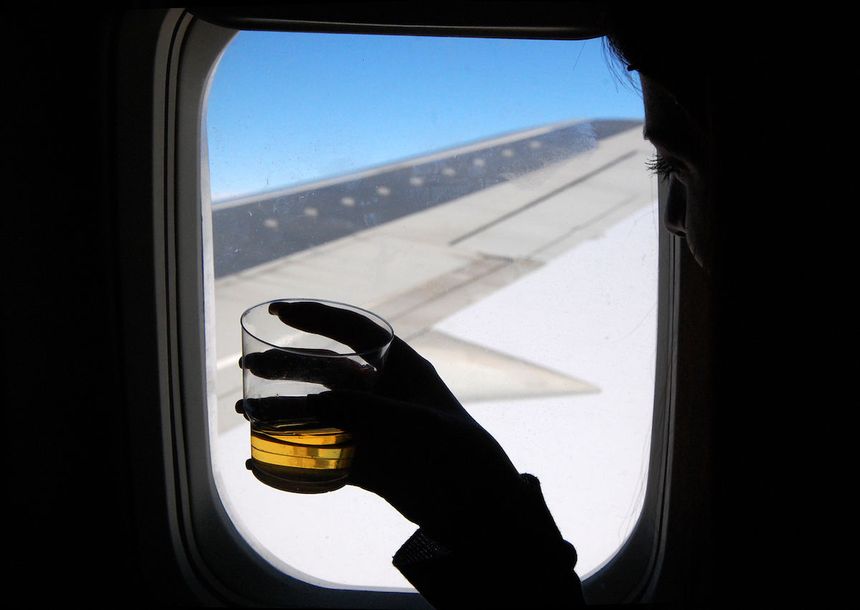 just want to confirm, can i put an alcohol bottle in my check-in bag on a plane?

This is a great post, but I really wish y’all emphasized on the fact that even though you can carry-on liquor mini bottles on the plane...you can’t drink them! I’ve had more alcohol related incidents onboard in 2018-19 because passengers think they can drink what they bring. https://t.co/nIGqPwoFYo