To prohibit the loophole in which bars and restaurants were serving chips or light snacks so patrons could hang out at bars and drink, the governor's office stated last Thursday that  those businesses must sell meals, or as he put it "substantive food", in order to allow customers to purchase alcohol.

Despite the State Liquor Authority's (SLA) written guidance that listed chicken wings as an approved food, in Governor Cuomo's press conference he stated "to be a bar, you had to have food available—soups, sandwiches, etc. More than just hors d'oeuvres, chicken wings, you had to have some substantive food."

The way in which the Governor spoke caused a lot of outrage among bars, restaurants, and patrons all over Western and Upstate New York. So much so, that One of Cuomo’s aides, Jack Sterne, tried to clarify on twitter by diagramming the sentence.  Other outlets have since reported that Chicken Wings are allowable food.

Ultimately, the SLA written guidelines include Chicken Wings as permitted food to be served with alcohol. But the SLA further published guidance about the concept behind allowing certain foods at a bar:

"As a restaurant or bar owner, in determining whether a particular item is substantial enough, please keep in mind the purpose of this policy: to ensure that patrons are enjoying a sit-down dining experience among a small group with drinks, i.e. a meal, and not a drinking, bar-type experience. A drinking, bar-type experience often involves or leads to mingling and other conduct that is non-compliant with social distancing and the use of face-covering and is therefore not yet a safe activity during the current health emergency. The spikes/resurgence of COVID-19 cases that this has caused in other states is something that New York must avoid at all costs." 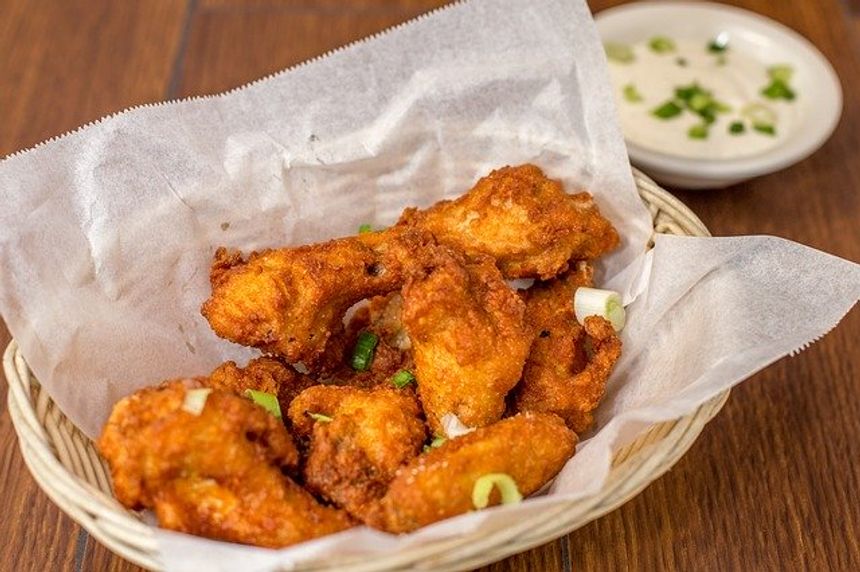 NEW: SLA updated guidance last night with Q&A for bar & restaurant owners on what foods can be served with alcoholic beverages in compliance with NY’s new rules.

Food sold must be “substantial” — i.e. no chips.

Found the rules in 15 seconds. Seems clear to me. Breweries can serve chips/pretzels as the food item, bars/restaurants need more food-type items like something frozen (how about a hot pocket?). https://t.co/ic58Hlf1jb