Lawmakers in Albany are as close as ever to achieving for New York what national efforts have thus far not been able to accomplish - Health Care for All.

The New York Health Act (A.5248(Gottfried)/S.3577(Rivera) has passed the State assembly by a 2/3 margin four times, and currently is just one vote shy in the State Senate. If it comes up again for a vote in 2020, chances look better than ever for its passing.

Funded by a progressive tax and non-payroll income such as capital gains and interest on investments, The New York Health Act would cover all medically necessary health care, including prescriptions. There would be no deductibles and no co-pays. It would deliver care in a public funding-private delivery model as Medicare does. It would not follow the model of socialized medicine more closely aligned with Medicaid.

Perhaps most significantly, the New York Health Act would remove the burden from New York employers to buy health insurance for their employees. The insurance would run with the person, not with their job, so individuals could more freely move about the state, go back to school, and pursue entrepreneurial goals.

Proponents point to studies by health economists, including one by the RAND Corporation, that say the cost would more than be offset by a huge net savings in overhead and administration expenses in the current system, which they say is inefficient, redundant, and leaky.

The biggest hesitancy lawmakers have voiced, including the governor, is concern that New York be able to keep federal Medicaid dollars in place. There is speculation that the president might withhold Medicaid to New York, or try to, if the state passed the reforms.

Many have been showing up to public hearings around the state on the proposed law, where there is overwhelming support. Critics, however, point to the failures of state Medicaid system which is currently running a budget deficit, and worry the same fate might befall a state model of Medicare for All.

"In the State Senate there are 31 co-sponsors, only one vote short of a majority. Since the majority party flipped in the last election, our hope is that it will be brought to the floor for a vote in the next legislative session." 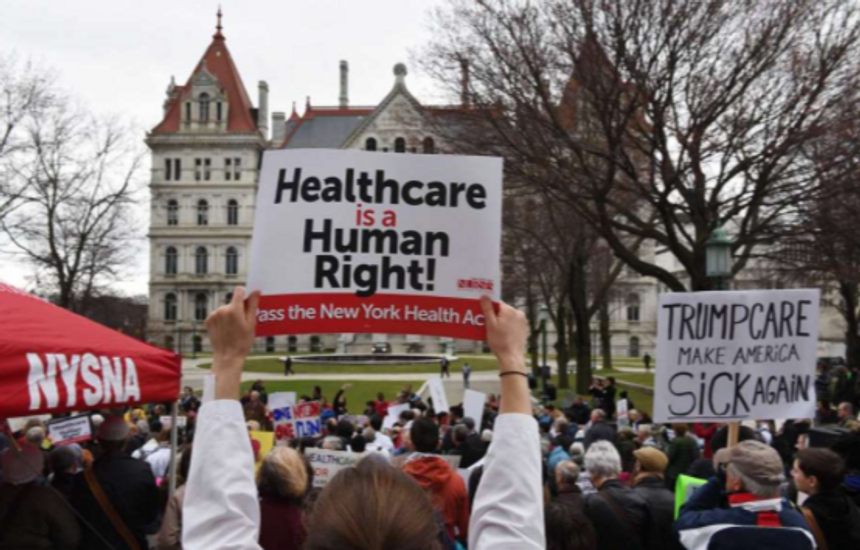