It is that time of year! No, not the holidays. It is time to choose next year's health insurance coverage. National candidates for the highest office are announcing an array of health care and insurance proposals for the future. But is anyone really winning this debate?

9 Reasons Why Health Care and Insurance are Hot Political Topics

1. Health care and insurance are extremely expensive, costing at least 10% of individual income. For employed individuals in commercial group plans, the employee’s monthly contribution is very high, but their employer’s contributions are even higher. If costs were to be successfully contained, employees could theoretically negotiate the difference as an increase in salary.

2. Out-of-pocket health care and insurance costs are also very high. In addition to premiums, costs include annual deductibles, copayments, coinsurance, and the prices of non-covered items. High deductible plans are of particular trouble to health providers tasked with collecting them from patients. But even the best of health insurance products in the market place today have a long list of out of pocket costs that have outstripped wage growth for the past 10 years and counting.

3. Even the most expensive employer-sponsored health insurance plans have reduced their payments to medical providers. This can be a huge shock to the working insured, to learn their expensive health insurance does not translate into better reimbursement to their doctors. A great commercial coverage plan often pays providers less than even the much maligned low Medicare rates.

4. Having so many uninsured or underinsured neighbors is driving up the cost of health care at area hospitals, nursing homes, clinics and medical practices for everyone. There are an estimated 100 million uninsured Americans under age 65, and this is a huge cost to absorb into the system.

5. Because many people have health insurance through their employers, it is tied to their job, instead of to their person. Millions are therefore not as free as they could be to move, become an entrepreneur, go back to school, pursue a different career, switch jobs or just find a better boss. This is bad for them as individuals and also a loss of all that entrepreneurial energy to our communities.

6. Health insurance is not unlimited. All contracts have caps and limits, and they are seldom fully understood by consumers until they reach one, and then gets translated into dissatisfaction with the insurance product itself. Because coverage has important exclusions, lifetime maximums, annual maximums, and strict utilization limits, it can and does run out on people, often when they need it the most, even as they and their employers continue to pay the premiums.

7. When Americans are asked what choices they most want in their health insurance, they want wider choices of providers, not necessarily a wider choice in insurance. In fact, a marketplace with as many different health insurance products as we currently have can actually be very problematic. The average number of choices an employer actually gives to an employee may be one or two companies. Not only do each pay different amounts to doctors, they each have different coverage rules, and have different lists of participating providers. Americans are getting caught out-of-network and having to pay a huge and unexpected expense in surprise medical bills. This is one more thing that would not happen if we had fewer but better coverage choices.

8. The coverage that is currently the standard in the marketplace is not for state-of-the-art or cutting-edge treatment. Insurance contracts instead offer partial coverage of an acceptable quality of care. Consumers who do not understand this will be critical of their coverage and may file complaints and grievances, without realizing that they were never promised experimental or investigational treatments. For true freedom of choice and top rate care, the height of luxury is and maybe always will be the ability to afford to go anywhere in the world and self-pay to get the best of the best.

9. The current system is losing a lot of money out of the system in inefficiencies and profits for the personal gain of certain executives, and these are the stories that make the headlines. From big pharmaceutical companies, to huge medical systems to large insurers, the inefficiencies of some are raising the ire of all. But on a day to day basis, small inefficiencies are also adding to the problem. Some patients are not taking an active role in their own health, pursue treatments rather than cures. There are too many incentives in the current stasis around the challenges that chronically sick legacy patients present to the system.

With enrollment in full swing, data tells us enrollment is down slightly, though between 69-80% of consumers enrolled in commercial health plans are happy with their coverage and would fight to keep it. Yet since 2006, the day of the year that big employer-based coverage breaks even has moved steadily, from February 28th to May 19th, and is it getting worse.

"keep the enthusiasm...while not scaring away voters in swing areas who fear major changes. So far, not one of the presidential candidates has found that perfect spot. The one who does could well be the next president." 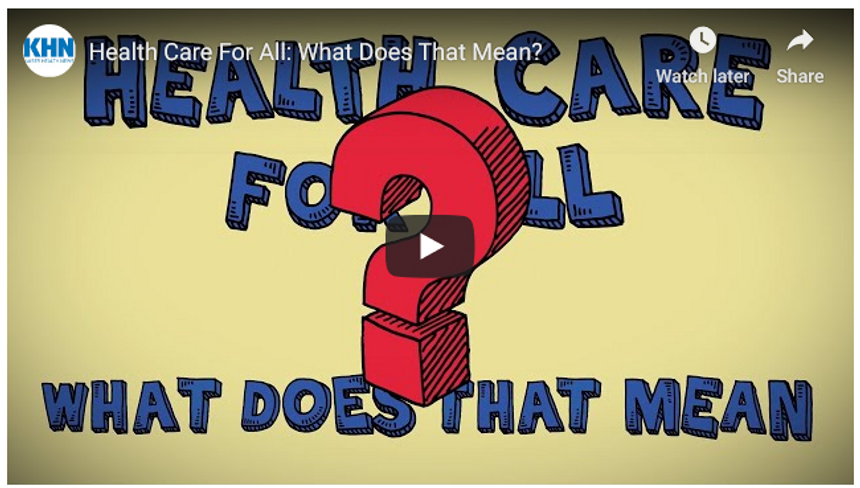